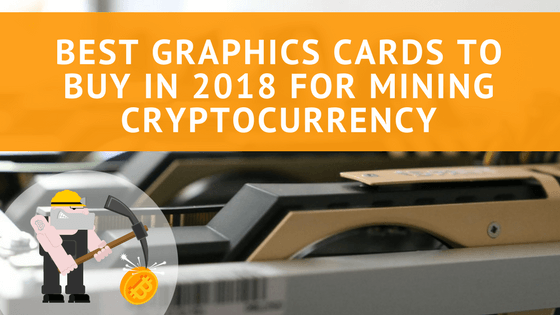 Are you planning to build a cryptocurrency mining rig and wondering what is the best graphics cards to buy in 2018 for mining cryptocurrency?

Your graphics card the the key component in your crypto mining rig when it comes to performance and earning coins. The thing is, graphics cards ain’t cheap! Most cryptocurrency miners will build their rigs 4/6 graphics cards at a time. You’re looking for something with high hash rate, low cost, and low power usage.

There are a few factors to consider when deciding which graphics card to choose for your mining rig so let’s get to qualifying what you would like it to do!

Some of the most common questions i get asked are:

Which graphics card is best for mining?

Which graphics card is best for mining ethereum?

Why graphics card for mining?

What is a graphics card?

To begin explaining the best graphics card to buy in 2018 for your cryptocurrency mining rig, it’s a good idea to give a quick overview of what a graphic card actually is and what it does.

Graphic cards use an architecture which is more suited for the parallel processing needed for image computation.  The usual PC processor is  somewhat of a pipeline.  One command in, one or more data words in, some processing and an address and data out.  A graphics processor handles an array of data in and out, with simple processing operations in between.
When applied to solving the blockchain, the same elements work in parallel to perform multiple hashes simultaneously.

Why is a graphics card import for mining Etherium and Cryptocurrency?

GPUs work well for rendering 3D games but they work great for mining Ethereum. Without getting too bogged down in the technical details, mining Ether requires a computer to continuously run a cryptographic hash function, which is a way to reduce an arbitrarily large amount of data (in this case a block on the Ethereum blockchain) to a datum of a fixed size (a string of so many numbers and letters). GPUs are great at running these hash functions over and over again.

I followed a strict methodology when reviewing the graphics cards. This ensured that I came up with a proper list of cards.

First of all, I considered the hash rates of a graphics card for three different mining algorithms. These three hashing algorithms are – Ethash, Equihash, and Cryptonight. (Best Cryptonight coins to mine)

You may ask why these three. Well, the answer is extremely simple. These three mining algorithms are used in most of the new mineable cryptocurrencies.

Plus these algorithms are memory intensive. And this feature makes them resistant to ASIC mining rigs. So the competition will be fairly low and within the reach of a newbie miner.

Do note that a single card doesn’t perform well in all cryptocurrencies. So I tested all of them in all the algorithms to see in which algorithms they perform the best.

I also considered the current selling price of the graphics cards. Because as most of you know, the prices of graphics cards are pretty high because of huge demand. Right now everyone wants a piece of the pie.

This is one of the most sought after GPU’s for mining in 2017 and still in early 2018. Launched in the Q2 2017 – The Vega 56 and Vega 64 have become the dominant players in the GPU mining game. Prized for their efficiency and computational power when it comes to mining, these two graphics cards are simply the best choice for mining cryptocurrency.

The Vega 64 can have a boost clock of up to 1677MHz in case of the liquid-cooled version.

Both the cards have 8GB of onboard memory with the top model having a slightly higher 945MHz memory frequency. The memories on these cards are of HBM2.

HBM2 stands for High Bandwidth Memory version 2. This is AMD’s own technology which allows GPU memory to break the barrier and communicate with the processor at much higher speed. And this is how Vega cards perform so well in mining.

Below are the best GPUs for mining Ethereum.  Listed from best to worst considering hash rate and power consumption.

What is the Best PCIe Riser for Cryptocurrency Mining?