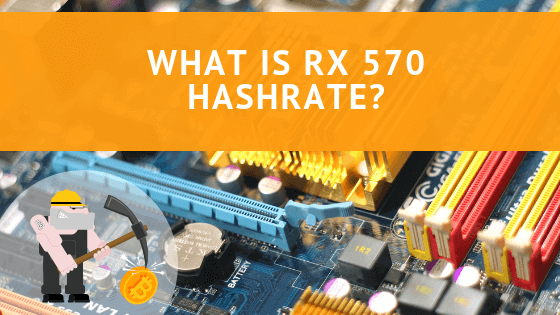 With AMD’s latest GPU, RX 570, many miners are looking into the specifications if it is good enough for mining? What is RX 570 hash rate? And if replacing their previous RX 470 GPU with the latest upgrade makes sense?

Don’t worry – we have all the answers for you that can help you make an informed decision in case you want to upgrade your mining rig.

First thing first, the most important thing for any miner is the hashrate the GPU offers. It allows you to compete in the increasingly competitive world of crypto mining. So what is RX 570 hashrate?

Well, when it was released, there were few concerns over the hashrate as it was almost the same as RX 470, even when RX 570 was rated as more powerful GPU. However, as time passes, miners learned to optimize the RX 570 GPU with the help of overclocking and to optimize its hashrate/wattage ratio.

For example, it offers 22 MH/s of hashrate when on stock frequencies, but you can easily improve it to 27 MH/s in case of overclocked GPU.

Is MSI Radeon RX 570 a Good Option for Mining?

It is if you know how to optimize its power to hashrate ratio, which is possible. The RX series is also designed for dual mining, so a good option for the miners who use the same mining rig for mining multiple cryptocurrencies.

It offers superior performance compared to the RX 400 series, and many other GPUs within the same price range. Some key performance features include:

Keep in mind, it consumes more power compared to the RX 400 series but offers the same hashrate. However, you can optimize the performance to improve your ROI.

For that, it is almost a must to underclock or overclock the RX 500 series, both RX 570 and RX 580 GPUs. If you don’t know how to do that, there is no point buying the RX 500 series as it will only increase your power budget while offering the same hashrate as of RX 470.

However, if you know how to configure it properly, you can improve the hashrate from 25 Mh/s to 30 Mh/s. This is where RX 570 becomes a better investment than RX 470.

Tip: It is also better to use it with Linux for better results, as it performs much better with Linux drivers compared to Windows drivers.

Well, the RX 570 is an ideal option for dual mining. However, its best feature is cooling that allows you to build a mining rig with a lot more GPUs. The RX 570 comes with a much better cooling system compared to RX 470.

Overall, if you know how to optimize your GPU and wants a powerful GPU for dual mining, the RX 570 is a catch.

How to Build an Ethereum Rig

How To Build A Monero Mining Rig