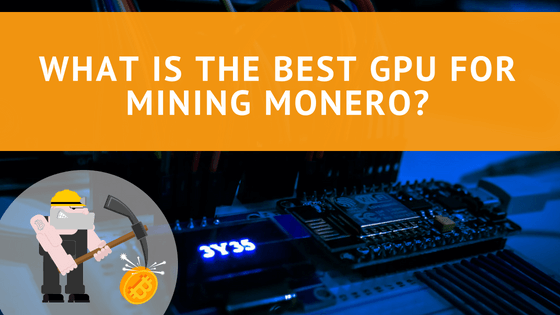 When we look into the hardware for mining cryptocurrencies, we don’t only look for power and sturdiness, but also the profitability. Same is the case if you are looking for the best mining monero GPU, one of the most important components of monero mining hardware.

Monero currently ranks 12th (June 2018) among the cryptocurrencies in terms of market capitalization. If you do have a right profitable mining rig,,

In fact, if you are building a mining rig for monero mining, the first thing you need to think about the GPU you want to use, every other hardware in your rig revolves around the GPU.

Also, keep in mind, if a GPU is a good option for one cryptocurrency, it is not necessary it works the same for another. The reason is different currencies use different algorithms. In the case of Monero, it uses an algorithm called cryptonight.

For example, we have already discussed the best GPU for ethereum mining – the AMD RX 580. However, there are better mining monero GPUs available.

Monero is also rated as the most user friendly cryptocurrency to mine, as you don’t need a very powerful GPU for this one, and it is also not only GPU dependent. You can use a CPU to mine this one, so a monero rig is a combination of a good GPU along with a good CPU.

What is the Best GPU for Mining Monero?

As discussed above, Monero is profitable with both GPU and CPU. A good combination of CPU and GPU can earn you a good profits.

Before moving forward, make sure you are using a CPU with 8GB RAM to increase your profitability. A good option is AMD Ryzen Threadripper 1950x.

Now, moving on to the mining monero GPU that is profitable for you. So which one is the best?

We recommend the one by Sapphire, the Pulse RX 580.

Even though AMD and NVIDIA are most popular brands for GPUs for mining, but they are also very expensive. Monero mining is not only dependent on GPU unlike most other cryptocurrencies, so if you have a good CPU, you can save a lot by buying an affordable GPU, that offers you the best value for your money.

One of such options is Sapphire PULSE RX 580. It allows you to create a mining rig that is not too heavy on your pocket as the price is almost half of that of NVIDIA and AMD models with same configuration.

As mentioned earlier, when it comes to mining rig, it is not only about the power of GPU. It is all about profitability, for which, the Sapphire PULSE RX 580 offers the best performance.

It is also a good GPU if you want to switch to other cryptocurrencies at some time, but probably not the best, but it can still make you some profit.

You can easily connect it with PCIe x16 slot on your motherboard.

Sapphire PULSE RX 580 is the best mining monero GPU out there that offers you the best price-per-performance. It can also help you keep the price of your mining rig in check without compromising on the performance.

The Easiest Way To Mine Cryptocurrency At Home | Test It...